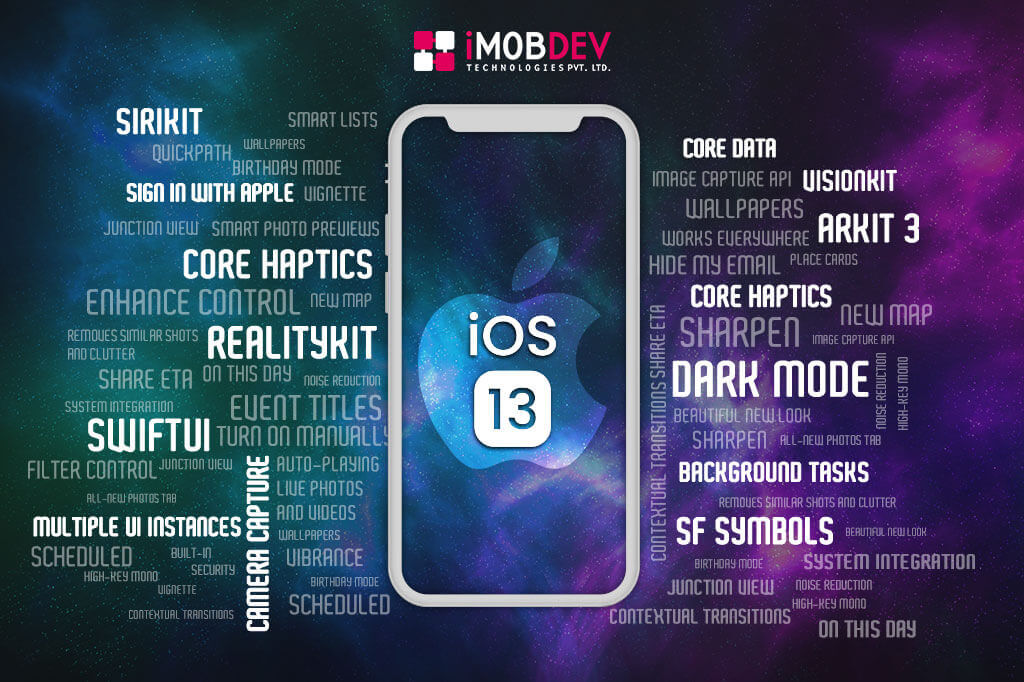 The wait is over now. iOS 13 is available in the market. iOS 13 was the most awaited operating system from iOS developers to implement the latest features in iOS mobile app development. An update always brings a quality change in either IT related things or non-IT. Here, we are in the conversation for Apple iOS 13 SDK toolkit, which brings lots of new hopes and future technology. Also, you can hire iOS App Developers from iMOBDEV for your business app development. Why don’t you update your business iPhone App and raise business standards with more powerful functionalities?

Previously we had discussed iOS 13 and its amazing features. So now it’s time to use the features like Dark Mode, Sign in with Apple, Core Data syncing with CloudKit, PencilKit and lot more. For building dynamic user interfaces using SwiftUI from iOS 13 SDK is much helpful. iOS app developers can create a Mac version of the iPad using UIKit.

Due to high demand from users and the current trend for Dark theme as Google has brought dark theme in it’s Android ‘Q’ operating system. Apple has a different perspective to grow OS and its features. Apple has no concern with the current trend for Dark Theme to be implemented. Also, Apple has brought out features years after opponents. The darker mode would reduce the eye strain while operating the phone at night.

iOS developers can use SwiftUI for app design in a declarative way. It is a choice for developers to set UI based on how it looks and works. It is easier to solve how it indicates when the user interacts with it. An imperative way user interface was in use before iOS 13 defined declarative way. A regular modification requires on User Interface that how it looks and works based on action taken by if using imperative user interface. SwiftUI is the most useful feature from iOS 13. It works as a cross-platform user interface layer that works for iOS, tvOS, macOS, and watchOS. Now it’s just easy to learn one language, one layout, and one framework and then expand your code anywhere.

Apple-designed SF symbols to smoothly unite with the San Fransisco system font. SF symbol ensures optical as well as vertical alignment with text for all weights and sizes. These symbols are providing in a variety of weights and scales to support you for composing flexible designs. Set of 1500 highly configurable symbol you can use in your app given by SF symbols.

Apple has always taken active steps to update its versions and relevant frameworks, functionalities, like ARKit in the upcoming iOS 13 SDK toolkit. RealityKit is a framework which allows developers to get photo-realistic picturization in their augmented reality scenes into Xcode 11 and iOS 13. Animations, effects, physics effects, and more on those AR objects is permissible in RealityKit. RealityKit is a native Swift API which linked against the iOS 13 SDK. RealityKit performs faster than before while using Swift’s language features to create an augmented reality experience.

Now very easy to access apps and websites using Apple ID. Apple has dropped out a tradition used for a long time like verifying email address, filling out forms, choosing new passwords, and now users can Sign In with Apple to set up an account. As we know, Apple has strong concerned for security, so all accounts have protected with two-factor authentication for superior security. Also, Apple will not track the user’s activity in your app or website while they interact with your app. Apple has so focused in-depth with Apple Sign In the concept for users. Respect for privacy – users can be in peace about their privacy. Sign In with Apple works everywhere like any browser and natively on iOS, macOS, watchOS, or tvOs.

The CryptoKit a new framework by Apple about to unveil in the iOS 13 which performs operations securely. CryptoKit allows developers to fulfill fundamental cryptographic actions, including hashing, key generation, and encryption. The CryptoKit will use the functionalities like creating and evaluating digital signatures using Public Key cryptography. Users can use private keys which resides in store.

iOS 13 brings an exceptional concept named Vision. Vision is a framework which operates saliency analysis on images. It will recognize individuals and animals in pictures. It can scan texts using a device’s camera.