How Artificial Intelligence Technology Save Birds From Solar Panel Collisions 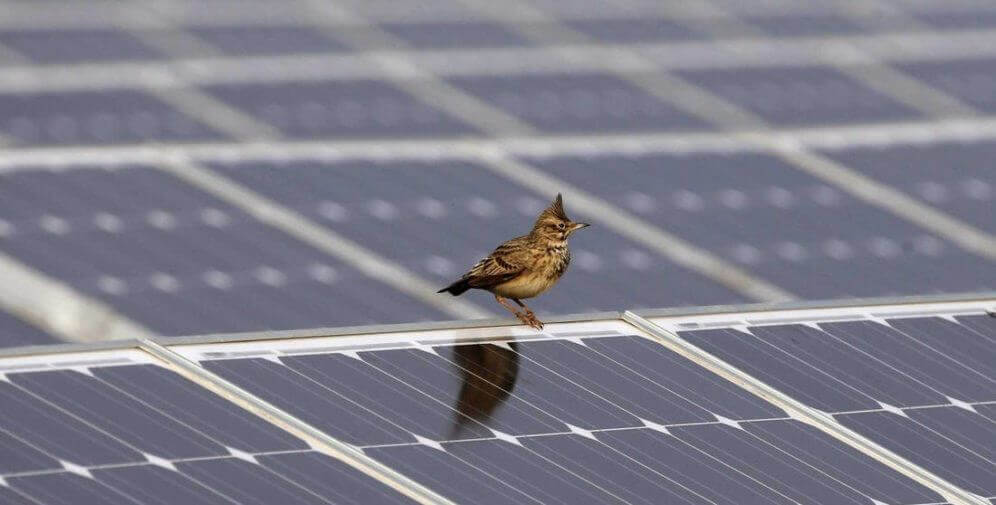 Introduction
Solar is the most abundant source of energy mankind can access,scientists and engineers across the globe are constantly discovering modern and better ways to take advantage of it. This clean energy technology is gaining traction with the rest of the world as they are easy to install and require little or no modification of any existing structure.In a solar power plant,operational and maintenance costs being relatively marginal,fuel is free thus the quality of the panel is perhaps the most critical element to consider,Solar power has proliferated by 53 times in the past nine years. Billions of birds die annually from collisions with windows, communication towers, wind turbines and other man made objects that are related to technology. In 2016,a first of its study estimated that hundreds of utility scale solar farms around the United States (US)may kill nearly 1,40,000 birds annually. A reason is that birds identify a reflection of the sky in the object to consider they fly into an unobstructed path and birds thus,come in many sizes,shapes and colors,mistake the glare of solar panels for the surface of a lake and swoop in for a landing.Although the damage to the solar panels is minimal,the impact of these structures on local wildlife is still a concern,but at the moment,the only way to track the bird deaths at solar panel facilities is having a regular human vigilance around the path,however an automated processing is possible.

Bird Algorithm
An algorithm that can identify an avian behaviour,analyse their flying patterns near solar panels is under consideration following a pattern when the wings of a bird are in, it essentially resembles a black dot while it flaps the wings when flying, can be fairly recognisable as a bird. A specially designed Camera System to monitor pedestrians and cars with a bird watcher mounted on the top of the panel to eventually figure out how avian behaviour changes around a solar panel which initially detects a moving object and classify it as a bird or not, then the system should be able to classify if the birds collide with any other object or trace their activity with the machine learning and computer vision to ensure the protection of birds in future.A bird spotting system rely on High performance Computing (HPC), data processing and training classification according to the researchers.A more efficient means of tracking birds is through an edge computing model which should be able to work within the camera to process it later on an off-site machine.

Artificial Intelligence Detection Techniques
The modern bird detection model differs in what it looks at.In fact,the technology in this is based on a model that was built to detect drones that fly in the sky where a computing model utilises an upward facing cameras to monitor the skies for drone detection system to locate drones with radio signals which may not work always since the drones cannot transmit signals all the time.While the drone model monitored an empty sky,cameras at solar facilities will be directed at the panels themselves which drag more objects into the line of sight of a camera, which complicates the detection process.Researchers are eventually tasked with finding solutions to prevent avian deaths by using a technology where birds interact with the site without the presence of a human observer would incredibly be beneficial as it is least impactful for wildlife.The Department of Energy (DOE) made a contract in the recent times with Agronne National Laboratory in Illinois, United States (US),to develop a tailor made Artificial Intelligence solution.With a little unique machine learning research, one can classify an object in a single object as it is required to classify a fast moving object overtime. For instance,if bird is flying,is observed as a black dot in some frames while wings are visible in other frames,hence an object need to be tracked as it moves across the camera.The number of birds that perish at solar panel facilities pales in comparison to other environmental calamities.

Conclusion
What it helps the researchers is to understand how the local environment such as weather,time of the day affects bird behaviour or it may identify other possible causes of feathered facilities.Destruction in India for example, is mainly due to the approval of projects by The National Board for Wildlife,The Forest Advisory committee and Expert Appraisal Committees in India in and around protected wildlife areas without following due processes. Birds love shelter provided underneath solar panels,hence professionals typically install bird barrier solar panel kits to keep birds from moving under the panels.Such projects are vital as they combine conservation with renewable energy and are a tangible recognition that a well being of nature should not be a leftover thought.