Does .NET have any Future? 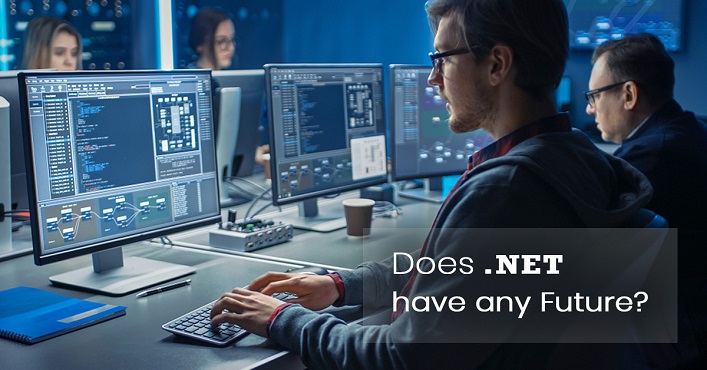 Time is changing, technologies are developing, and the influence of technical languages on developers’ lives is also evolving. Today, we will discuss one programming language, .NET, as a platform that can be used to build all kinds of software applications.

Over the years, renowned companies introduced new technologies in software development. Some technologies like .NET are here to stay, and some have disappeared over time.

.NET is a full-stack Platform – A Summary

The three layers of a typical software application are – front-end, middleware, and back-end. The front-end is the web pages usually written in HTML and JavaScript hosted in ASP.NET in a web application. Middleware is generally written in C# as a library or API. And lastly, the back-end is a code that operates on a Web server (IIS) and communicates to a data source.

.Net Core is both open-source and cross-platform.

A significant achievement of the .Net Core is that it is available with the end number of unique features, which are advantageous for development, web, cloud, and mobile applications. But users and developers need to know that .Net Core does not support all features of .Net frameworks.

Look at the following reasons to know why it’s better to go for .Net over other languages.

As we all know, .Net Core is an open-source software framework, so enterprises and developers prefer to build apps using this over others.

Today, the world is run by software, and it is not limited to just for web, windows, or mobile; it even manages a car, and the TV too runs on software. Every home is powered by software that includes security, internet, thermostats, bulbs, fans, door locks, and more. Even the weather is monitored by software, and the notifications on smartwatches are a work of software. .NET is a unified platform to build app kinds of software applications.

Also, .Net is used to build desktop, web, cloud, mobile, gaming, IoT, and AI applications. It takes the privilege of modern capabilities available in the latest browsers, the cloud, and other devices.

If you’re an existing .NET developer or want to become a .NET developer, know that .NET is one of the popular and commonly used frameworks in the IT industry. Most of the fortune 500 companies use .NET to build their software.

Key Features of .NET include:

Advantages and Disadvantages of .NET

One of the significant advantages of the .Net platform is its unified environment which Microsoft offers. There is endless horizontal scalability at the platform of .Net to get most of the IDEs and tools within the Microsoft Developer Network.

The disadvantage is, the migration to .NET is more expensive compared to other frameworks. In this framework, the managed codes run slower in comparison to the native code. And for new features and improvements, developers have to depend only on Microsoft.

Here are some Exciting Takeaways of .Net:

The future of .NET seems promising, a place to build plenty of advanced applications. .NET development is more straightforward but also richer in every sense. This will make every .NET developer’s life a lot more easy-going. Microsoft is all set to bring more enhanced power and functionalities to its product.