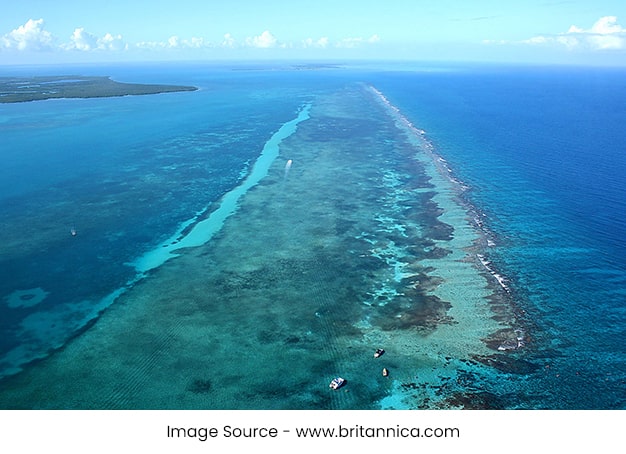 Your journey to one of the last unspoiled places on earth is just a two-hour flight from the U.S. Look at the location on a Belize map and you see that it sits on the eastern coast of Central America. Belize beckons to you as tropical getaway embraced by the warm turquoise waters of the Caribbean Sea.

Be rewarded by a combination of experiences unlike anywhere on earth. Behold the majesty of lush tropical rainforests and mystery of the ancient Belize Maya. Relax in solitude on uncrowded sandy beaches made more spectacular by the Western Hemispheres longest barrier reef.

Scan a map of Belize and you see that it is bounded on the north by Mexico, the south and west by Guatemala and to the east by the Caribbean Sea.

Belize is 176 miles long at its longest point, 88 miles at its widest point and covers 8,867 square miles, including 266 square miles of offshore islands. It is approximately the same size as the state of Massachusetts in the U.S., approximately one-tenth the size of the United Kingdom and larger than all of the former British Caribbean countries combined.

Belize coordinates are between:

Now that you know where Belize is located, start planning your trip to the beach, the inland rainforest or the barrier reef. Get ideas for accommodations, activities, destinations and more at the My Belize Vacation Planner.

Given the countrys size, the geography of Belize is quite varied. Off shore there are coral sand and mangrove islands rising off the ocean floor and a majestic barrier reef. Starting at the coast, lowland savannahs and lagoons are fed by crystal clear rivers that drain the basins and valleys of the majestic Maya Mountains.

The plains of northern Belize were once the ocean floor. The land is covered with a thin layer of soil that supports scrub vegetation and dense hardwood tropical forest. The low-lying coastal area supports mangrove marshes, home to birds and wildlife, and forms a natural protection against coastline erosion.

After the coastal Belize City which sits a few feet above sea level, the sandy soil of large savannahs extends 30 miles westward. The land rises slowly into the plateaus, valleys, and peaks of the Mountain Pine Ridge at 1,500 feet and continues to the Maya Mountains that stand at 3,680 feet above sea level. The mountains are surrounded by rugged karst limestone hills dotted with the largest cave system in Central America. Rainfall from the highlands and underwater springs flow into the Mopan River on the east side of the mountains and the Macal River on the west side of the mountains. The two rivers converge just outside of San Ignacio Town to form the headwaters of the Belize River that flows east to the Caribbean Sea. Long before the highway systems were developed, this river system was used as the primary communication system and trading route for upriver settlements and for exporting Belizes first industry: logwood and mahogany.

The geography of Southern Belize differs considerably from the other regions of the country. Its watershed to the southeast from the Maya Mountains creates numerous short rivers that rush through slopes combed with overhanging ledges and caves, housing hundreds of Maya artifacts. The rivers, carrying sand, clay, and silt, have enriched the coastal belt over the years, making the area ideal for the agricultural production of citrus and bananas. With an average annual rainfall of 170 inches, Southern Belize boasts a true tropical rainforest rich with ferns, palms, lianas, and tropical hardwoods.

The Barrier Reef, at 185 miles long, is the longest in the western hemisphere. Off the Belize Barrier Reef are three of the four Caribbean atolls and hundreds of offshore cayes, pronounced “keys”. The cayes are islands that are either coral sand-covered or mangrove-entangled and are mostly located between the mainland and the Barrier Reef with a few almost on top of the reef crest. Outside the Barrier Reef are the ringed island formations of Belizes atolls with shallow, mangrove-lined lagoons inside. This combined system of reef, cayes, and atolls form Belizes marine environment which is consistently cited by visitors as a primary reason for visiting Belize.

Latest posts by MafnasChiappinelli593 (see all)