by Camilla Mancini October 26, 2012 No Comments 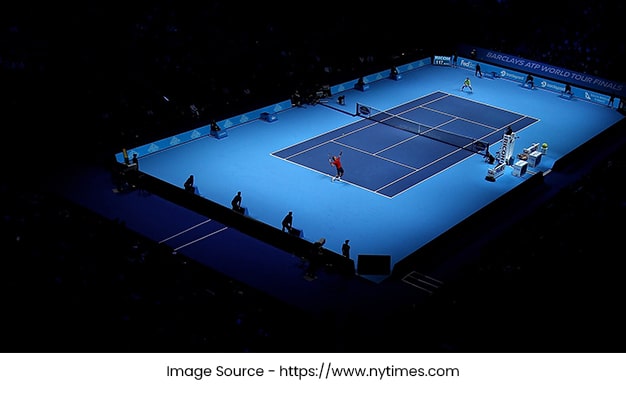 The top 5 on the ranking for the Race to London already caught their ticket to the ATP World Tour Finals in the O2 Arena, leaving the last 3 spots clear for the bottom half of the top 10.

We are just a couple of weeks away from the 2012 Barclays Finals and there are 3 spots free that would be filled by some of the bottom 5 players of the top 10 of the 2012 Race To London ranking; the 11th or 12th positions, Richard Gasquet and Juan Monaco respectively, might have a chance too, but they will hardly get it, considering the number of points they’ll need to surpass even Tsonga, who’s currently on the 8th position. Although it is more probable to see the current 6th, 7th and 8th positions qualifying, here’s a quick review on how the bottom five are standing in the ranking.

With 4,080 points, Tomas Berdych is on the 6th place and therefore right now is in an advantageous situation, being the closest to enter the Finals. At the time the Czech player is participating on the If Stockholm Open semi-finals and is doing quite well; after defeating Mikhail Youzhny in quarters, Berdych will face Almagro on the coming match. However, The Berd won’t be participating at any of the last two ATP World Tour 500 series competitions that will be disputed next week. The 500 tours could have given him more opportunities to secure his spot to the Finals sooner, especially because the following four players of the ranking will be hunting more points on the Valencia Open or the Swiss Indoors Basel, but he’ll wait for the BNP Paribas Masters.

The 24-year-old, Juan Martin Del Potro, is also really close to return to the O2 Arena, since his first appearance in 2009, when he reached the final, but lost against Nikolay Davydenko 6–3, 6–4. With 3,670 points Delpo is the lucky number 7th in the ranking right now, nonetheless he’s still looking for points in Austria at the Erste Bank Open, where he could end up in the final facing Tipsarevic –who’s currently 9th and need as many points as possible too-, since both will play at semis tomorrow against two players from a lower level. The giant Argentinean will be competing at the Basel Open and the Paribas Masters, where he most certainly will earn the points to reach a spot for Barclays.

Jo-Wilfried Tsonga is on the 8th place of the ATP with 3,295 points, followed closely by Janko Tipsarevic with 2,810pts and then by Nicolas Almagro with 2,425pts. Tsonga has reached the semi-finals of the Stockholm Open and will have to battle Almagro, who has records quite similar to the French, but who has failed to beat him in every match they had this season (5); giving those past results tomorrow’s outlook is promising for the Frenchman. The “Tennis Ali” will be going to Valencia and Paris for the last two regular ATP tournaments of the year and depending on his performance at them, we might get to see him in London once again.

For now the Barclays ATP World Tour Finals has Novak Djokovic, Roger Federer, Andy Murray, Rafael Nadal and David Ferrer included for the competition. There, Federer, will be defending the throne and looking for a seventh title -third consecutive. On the other hand, although Rafael Nadal is still recovering from his injury, he is expected to be totally recovered by October 5th, to play in the Finals.